This year’s GITEX Tech Week is up and running, and we have some of the most exhilarating spectacles on display at the Dubai World Trade Centre.

The show once again proves to be the biggest tech exhibition in the Middle East with an exciting jumble that stretches from the latest and high-end B2B Digital Signage Solutions to Electric Cars from the likes of Tesla and Mercedes.

Cutting Straight to the Chase

Alongside a fleet of human-like robots, electric cars and VR/AR booths, Etisalat also broke the record at its stand in the Dubai World Trade Centre by clocking 71 Gbps 5G speed which was also portrayed on the Philips X-line Screen. Watch our featured video below. 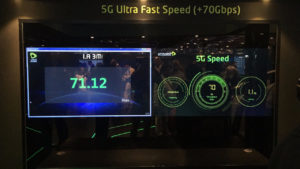 Get our latest posts in your inbox.